Season 2 brought leaders from a variety of different industries and company sizes. The one thing they all had in common was their focus on their people. That focus on their employees has made these leaders and these companies some of the fastest growing and best places to work.

Don't miss an episode. Subscribe to Next Generation Rockstars.

Disclaimer: This transcript was created using YouTube’s translator tool and that may mean that some of the words, grammar, and typos come from a misinterpretation of the video.

The Transcript - Next Generations Rockstars: Season 2 Wrap Up

[00:00:00.060]
Welcome to the Next Generations RockstarsHoward Behar podcast. If you are trying to figure out how do you recruit and retain this next generation of rock star talent while you are in the right place.

[00:00:14.310]
Hey and welcome to this week's episode of The Next Generation rock stars podcast. So this episode is actually a wrap up of the entire season too. And what an amazing season this was. This season has brought about leaders from all different companies and there have been some big names that we've brought in Howard Behar from Starbucks. There was Horst Schulze who is one of the co-founders of the Ritz Carlton known for their culture known for their customer service. Then there was Fran Katsoudas who is the chief people officer at Cisco Systems globally.

[00:00:50.820]
Matt Schuyler who is the Chief H.R. officer over there. Hilton Hotels again a massive global company. But then there are also people that you may not have heard of before their episode came out. People like. Ben Wright at Velocity global making a huge different difference over there.

[00:00:00.000]
Alan Cherry was the former head of H.R. at Tesla. Now he's at a company called our planet earth and they're doing some amazing work. But then you also have someone like Crystal Khalil at Pausch North America and of course Cassie Buckroyd of Columbia Sportswear. All of those people whether they're a big household name or you know people you might not have heard of before their episode went live. These people are making a difference in their early career talent. And I would venture to guess it's not just their early career talent that they're making a difference for it's really everybody who's lives that they're coming into contact with.

[00:01:49.260]
And the third touching and making a difference on because you know what you source in each and every one of these interviews is that they are creating an environment within their company or a culture within their company or people want to come to work. And when people want to come to work you see a big difference in the type of work that they're doing in the fact that they're giving it their all. They want to innovate. They want to make a difference. They want to be more productive and in the end, companies tend to see increases in productivity profitability.

[00:02:24.630]
You know just a few important things that CEOs like to see on bottom lines. But do you know why they're doing it. It's because these employees feel supported. They feel that their company but more importantly their leader. They feel like they see them as more than just this cog in the big corporate wheel. They feel that their leader and their company sees them holistically as a real person with actual real things going on in their lives. And that's really important. That has made all the difference. Every single one of these leaders is making that difference every single day.

[00:03:05.310]
And I think that is something that each and every one of us can learn from. You know maybe we don't implement everything that my Schuyler at Hilton is implementing across you know a massive global workforce. Maybe it's just we pick out one or two things as lessons learned that we can implement today or maybe you take the lead from someone like Cassie Buckroyd at Columbia Sportswear where she is taking in things and saying OK you know what. This was a great lesson learned. We listened to our employees and this is how we're implementing it.

[00:03:35.630]
You know she's taking in that survey information and then she's taking action and making a real positive change for her employees. So these are just some small things that different companies have done. But what can you do as a leader as an employee of a company maybe as a CEO of a company? What can you do to make a difference for your employees or for your team or maybe your entire company? What are some small things that will have large ripple effects so that the people sitting around you day in and day out know that you see them?

[00:04:13.200]
Not just as someone who gets work done but you see them as somebody who makes a difference you see them as somebody who's human and it has all the emotions and things with being a human that are all involved. We've really seen this massive integration between work and life. It's no longer two separate entities. It really is. An integration. There's no balance to it. It really is integration with all the technology that we've introduced besides cell phones besides email. We really have. Integrated work life and personal life.

[00:05:16.090]
So Season 2 was pretty amazing. We had some great guest and I think that you will see season 3 brings about even more amazing guests. Season 3 will be all about young employees so millennials and if we can find some Joneses who are now leading teams maybe for the first time maybe they've been leading teams for a little while now. But we're gonna learn about their lessons learned. What did they learn along the way what was maybe some of the mistakes that they made? And how did their leaders support them how did their company support them as they made that tradition or a transition from individual contributor to leader of a team.

[00:05:57.690]
So looking forward to seeing you in season three of the next generation rock stars that will be launching early 2020. All right see you then.

[00:06:08.920]
So be sure to subscribe to your favorite podcast platform of your choice and you will see the next generation rock stars show up just for you.

Disclaimer: This transcript was created using YouTube’s translator tool and that may mean that some of the words, grammar, and typos come from a misinterpretation of the video. 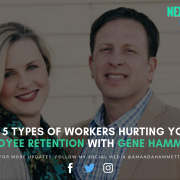 The 5 Types of Workers Hurting Your Employee Retention 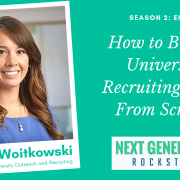 Kayla Woitkowski: How to Build a University Recruiting Team From Scratch 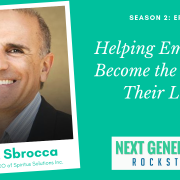 Rick Sbrocca: Helping Employees Become the CEO of Their Lives 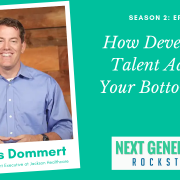 Travis Dommert: How Developing Talent Adds to Your Bottom Line 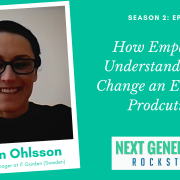 Malin Ohlsson: How Empathy & Understanding Can Change an Employee's Productivity 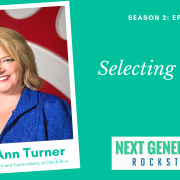